This is the preliminary (happy) end of a very long journey. As some of you might know I am a fan of the Sun Audio Uchida 2A3 amp for more than ten years. Initially an article about this amp written by Roland Kraft and published in the German Hifi Exklusiv magazine 01/1994 awoke my interest (see that article at the end of this blog post). At that time I still was infected by the tube amp virus but the symptom "single ended triode freak" was not visible at all. Anyway, my infection got worse and worse and around 2005 I finally bought my first 2A3 amp, it was a More Fidelity Musiqa No. 3. Later on I remembered the kit of Masaho Uchida again and simply for my general interest I kept in touch with Robert Graetke of Analog Tube Audio, who assembled these kits in Germany (and still does nowadays). Fortunately he was located close to my home town and finally I visited him in spring 2010. I had the opportunity to hear his own Sun Audio 2A3 in comparison to my 2A3 amp and then my decision was crystal clear: I had to order a kit at Europe´s official distributor Acoustic Dimension (Peter de Bruyn) and let it assemble by Robert. And I did - that´s how it all began. I started sharing my thoughts and experiences and 2A3 Maniac was born.

Of course I also started collecting NOS tubes, especially 2A3 types. When looking for famous (and expensive) single plate types, I grabbed an interesting pair of Raytheon 2A3H, at that time not knowing what a spooky tube it was. I was naive enough to believe what the seller was saying: that this kind of tube is a one-to-one replacement for the standard 2A3. But it is no 100% identical 2A3 replacement tube from the technical perspective! The "H" in the name indicates as usual that it is an indirect heated tube, indeed this is the only indirect heated 2A3 which ever has been built (as far as I know only in the second half of the 1930´s). This indirect heating of course means higher losses compared to direct heating. Consequently the designers of the 2A3H compensated these losses with a higher heater current of 2.8A instead of the 2.5A according to 2A3 standard specification! This means a 2A3H in a standard 2A3 application will be underheated and sooner or later this 2A3H would get damaged. 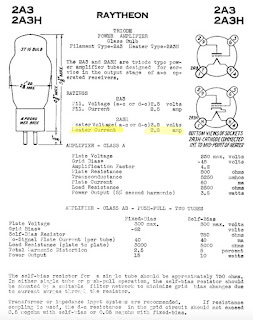 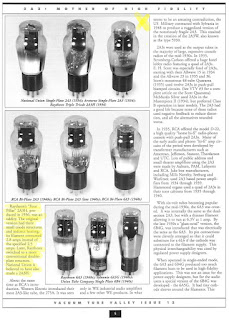 2A3H specs and details can be found on tubebooks.org and also in Vacuum Tube Valley Issue 12

Anyway, I was absolutely fascinated by the sound the 2A3H was providing, even being underheated in my "standard" Sun Audio SV-2A3 amp (what I did not really consider that time). I started searching for 2A3H tubes all over the world and even a real oddity fell into my hands: a 2A3H with top cap anode connections! Obviously this was dedicated for high frequency applications: 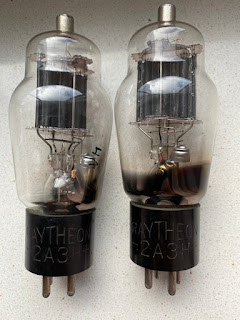 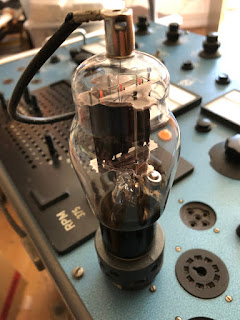 
Of course it was clear to me that I would not burn all these precious 2A3H tubes in a standard 2A3 environment. I mean, we are talking about antiques here that are more than 80 years old. As I also had some further constrains and issues with my former Sun Audio SV-2A3, I kept in touch with Robert Graetke again by end of 2019 in order to find a proper solution which should match all my requirements and boundaries as follows:

- use of a new Sun Audio kit with hum balancing on top of the chassis
- entire circuit especially engineered, designed and optimized for the 2A3H
- operation of standard 2A3 only as a by-product (if possible without too complicated efforts)
- lower total gain as the usual sensitivity of 150mV for full output is uncomfortable with my setup
- 180° phase shift as my current pre amp also inverses the phase by 180°
- use of 6SN7GT instead of ECC40 as input / driver stage

Well, end of 2019 I was asking Peter de Bruyn of Acoustic Dimension for a Sun Audio SV-2A3 kit accordingly but to my surprise it was not available! Peter explained that Sun Audio´s former chassis supplier was not any longer producing chassis respectively not delivering chassis to Sun Audio (for unknown reasons) and they had to find a new supplier, a process which obviously took a couple of months (and I even got the impression that this topic is not 100% solved up to now).

Luckily Peter had a 300B kit of Sun Audio on stock which I caught! Not a big deal for me as the 300B kit contains the same chassis, transformers etc. like the 2A3 kit. Just a few capacitors and resistors differ but I did not intend to use these parts anyway.
Well, finally the development of the new circuit was a little challenge. The first step was quite obvious: both triode systems of the input / driver tube 6SN7GT needed to run in parallel. This way we killed two birds with one stone: overall amplification factor decreases and phase automatically inverses 180°. Also beneficial that the internal resistance of that double triode was halved that way, too.

Reason for choosing the 6SN7GT type and not the ECC40 was of course the superb sound quality of various redbase JAN CRC-5692 of RCA which I have available. A super quiet "low microphonics" tube due to their heavy base which absorbs vibration like a damper. 10,000 hours long life filaments; to me simply the best sounding 6SN7GT type. Some might argue the CV181 would beat the RCA´s but the sound quality of 5692 is on the same level. Furthermore the low microphonics, the long life of the 5692 and finally the non-availability of CV181 in NOS quality are reasons to believe the 5692 is the primus inter pares of all 6SN7GT tubes.
The use of the 2A3H required some efforts: we needed 2.8A heater current. Finally we decided to chose an alternative tapping from the power supply transformer. In our preliminary calculation we even could save the series resistor and indeed it worked as intended without it. By the way: also usual 2A3 tubes can be operated without any further adjustment even as they will be slightly overheated with 2.6A heater current which is only 0.1A more than specified (+4%).
The choice of the rectifier AZ12 was mandatory for thermal reasons. The circuit we initially started with, led to a temperature of 72°C on the surface of the power transformer cover (continuous operation). Too much for my taste! 66°C was the maximum I was willing to accept in terms of technical long term reliability. The main reason behind of course was the high heater current the 2A3H is consuming; with the 5U4G the entire circuit really would have been on the edge. The much more efficient AZ12 in comparison has a much better power balance. Together with the more efficient (later) circuit without series resistor it finally led to a reduced surface temperature of 64°C only (continuous operation). Well done, Robert!
And how does it finally sound? Well, words can never express what you really hear and feel. Fantastic auditory source width and three-dimensionality, rich coloration of the sound, quick and fast, authentic voices - but that is all boring blah blah blah... I am going to share some pics instead which might transfer some impressions. Internal wiring is Analog Tube Audio Pure Silver cable, the feet are simple flight case types for a few bucks on amazon. All the other stuff is quite obvious: 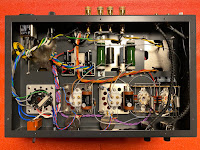 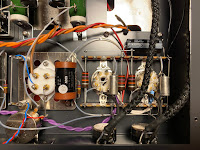 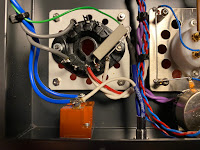 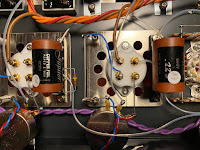 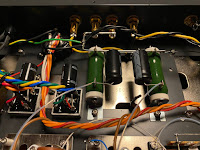 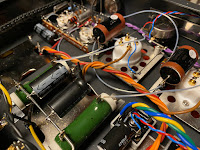 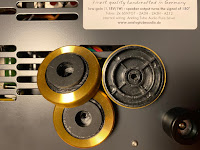 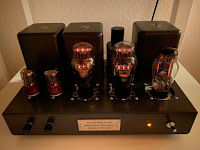 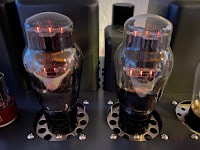 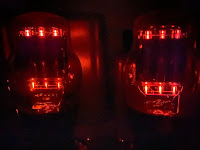 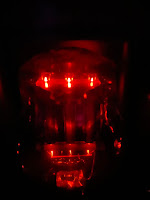 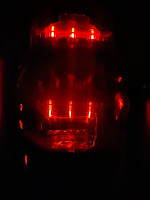 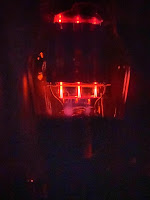 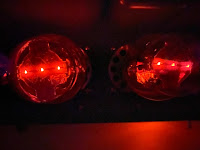 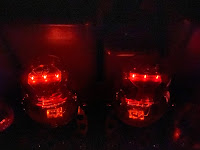 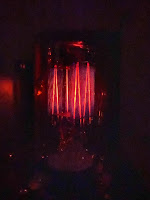 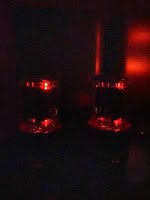 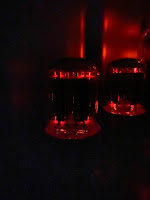 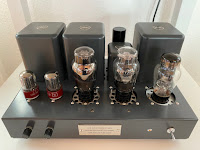 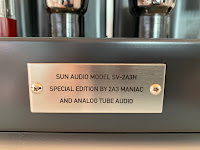 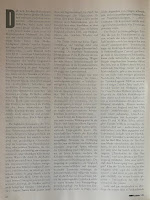 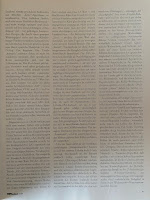 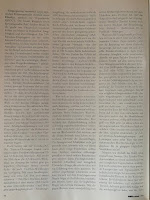 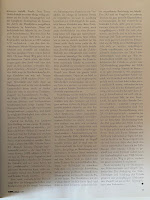 Would I really recommend you also to build such a 2A3H tube amp? No, I definitely would even strongly advise not to do! The 2A3H is such a seldom tube and when you have collected some, be aware that you need to calculate with 60-70% rejects which of course can be used (somehow) but their values are far away from NOS values. Independent from what the seller will promise to you. I believe I still did mention that the 2A3H is a spooky tube, didn´t I? Even at various measuring campaigns we experienced some curious behaviors... But this will be subject to separate posts next time (also about the different types of 2A3H tubes). Stay tuned!

Finally: if you should have 2A3H tubes to offer, please send a quotation to my e-mail address:

P.S.:
Special thanks to Robert Graetke of Analog Tube Audio for all your efforts, ideas, patience and the skilled craftsmanship! Without you this project never would have been realized.
Posted by 2A3 Maniac at 9:55 PM